You are here: Home1 / History2 / The language

In the 13th century the dialect spoken in central Sweden around Stockholm went through changes. The diphthongs for the words stein /stone and bein/bones became sten/stone and ben/bone, this novelty did not reach the outer areas of the language area. In Dalarna and on Gotland, in Finland and in Estonia, they kept their diphthongs. On Dagö and in Gammalsvenskby as bain and stain.

In other words, the words were pronounced as they were written, while the national language was simplified. Sj- was still spoken as s + j (or s + i) as in s-i-uk. The letter k was kept hard in front of all vowels as in the stick-käpp with hard k and the same with the g-et as in pike-gädda with hard g. They kept their three gender and never introduced the novelty real (the-sex); one said e.g. he about the moon and she about the sun. The letter ö had weakened to one e (meat-kött became hard with k) and the letter y had become one in (church-kyrka became church with hard k). The eng sound was never introduced singing was pronounced eg siun-g-ga with clear g in the middle and a hint of g at the end.

Old-fashioned German words (compare with English) as shavings for spoon, horsar about young horses and roov for a type of protruding roof were also kept. When the villagers in the beginning of the 20th century saw a bicycle for the first time, a small dispute broke out in the village about what to call this thing. Some people thought it would be called ria-waven (a riding car) because you were sitting on it, others thought it should be called loop-hiul (a running wheel) because you like it ran with it. Ria-vavn won and hit through the Swedish village goal. Otherwise, a lot of German words (about diseases and medications) and Russian words (about fruits, vegetables and dishes) were collected. In fact, some Estonian words had actually followed with from Dagö, such as peltik (outdoor shower) and konn (frog). 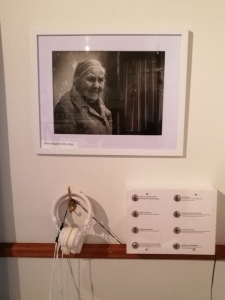