You are here: Home / Projects that engages the association The Swedish Villagers / Developing projects in cooperation withICLD

A three-year democracy project is ongoing between Gammalsvenskby (Zmijivka) and Region Gotland (the municipal authority) with funds from the International Center for Local Democracy (ICLD). The project started in July 2016 and deals with knowledge exchange between Gammalsvenskby and Gotland’s municipality/region for development in democracy and agriculture. From August 1, 2017, the project was approved for a third project called “Pilot village in changing times” and is focused on mainly tourism, where Berislav (the regional office) and neighboring villages will also be involved. In total, the projects encompass SEK 3.6 million. The money goes only to knowledge building and exchange trips.

The first education in democracy and agriculture was carried out in the village in October 2016. It was very successful and started a commitment both in the village and on Gotland. In May 2017 until 2019, Gotland had visits of 12-18 people from Gammalsvenskby every year. There have been intense days with many rewarding study visits to various farms with refinement and on public establishments such as schools, retirement homes and libraries. In 2018, a trip was made to Stora Karlsö to gain knowledge about how day tourism can be organized. The Swedish Village Association showed the new exhibition about the Swedish village’s history and told how an association can create a museum together. At the visits, democratic forms of work and organization have permeated all activities.

In September 2017, 2018 and 2019, some 15 people from Gotland went down to Gammalsvenskby and had a week’s training and study visits in Gammalsvenskby and the surrounding area. The tourism project was also started with education in tourism, visitor development and cultural heritage. In 2018, soil samples and water samples were made, as well as an investigation into the water issue, since it affects the village’s agriculture, tourism and, not least, the villagers themselves.

The joy of the projects is tangible, the bobs are very interested, knowledgeable, persistent and happy for the project collaboration. A great asset for Region Gotland is to be infected by their great joy in life. They are grateful for what they have – while we are often dissatisfied with what we lack; the difference in life attitude is evident! 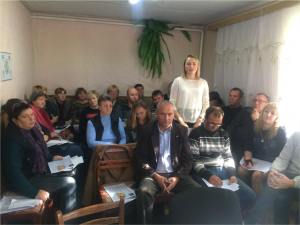 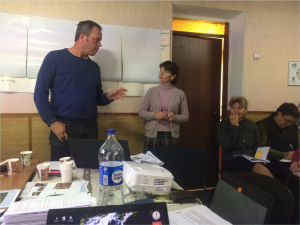